Hey friends and family! Hope all is well. If you follow me on social media, you know I just got back from touring with Sadie (granddaughter) on her Live Original Tour. I rode the bus and everything! Pretty cool.

I was thinking—who, at my age, gets to experience the tour bus life of a rock star? Then I remembered Paul McCartney, Mick Jagger, Cher, and Rod Stewart all tour and are older than me, so maybe it’s not as rare as I thought, but it’s still verrrrrrry cool and a first for me. Two years ago, 2 papa and I went on Sadie’s tour, but we rented a motor home and followed behind the tour buses. That was fun too, but this time I was right in the middle of bubble of tour life.

I’m going to give you a glimpse into the tour bus life for those of you who might be wondering if this life is the super coolest thing ever. I would say, yes, on most levels it is!! But, like all cool things, there are a few challenges. So, this is part 1 of my tour bus—wow, I want to say trilogy because it works so well with tour bus, but it’s only two parts, not three—so I guess I have to say tour bus duology. 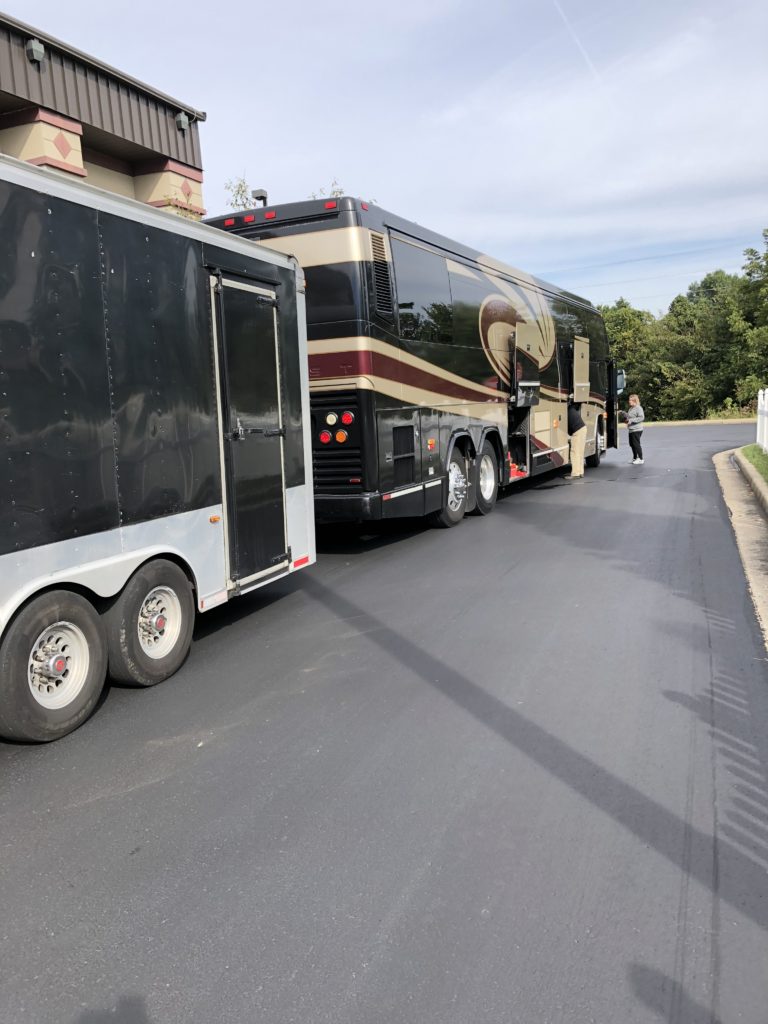 Here we go. The buses load up and pull out around midnight each night. Since the show isn’t over until 10:00, it takes a few hours to load the equipment. The artists sleep on the bus during the night so they are ready to start the next day at a new venue and the bus drivers are taken to a hotel room so they can sleep during the day. Sadie’s tour is set up to drive out on Wednesday night and perform on Thursday, Friday, Saturday and Sunday. Then return to home base after the show on Sunday night. They take Monday and Tuesday off and load again on Wednesday night.

The first night we met at a designated store where we were supposed to leave our cars and load the bus around 10:00. But, the designated store ended up not happy with one of the bus drivers from another tour, so we had to move to another location where we left our cars for five days. (Yes, there was more than one prayer said that our cars would still be there when we returned on Sunday night.)

Once on the bus, we were given our bunk assignments. (Think summer camp, only way tighter) There are twelve people on each bus and there are two buses. The bunks are stacked three high and across from each other with the aisle between them. I had the bottom or floor bunk. (This might be considered profiling because they didn’t want the oldest on the bus to fall while trying to get in bed.)

After some get-acquainted time that first night (remember, I was sleeping very close to people I had never met) we all climbed into our bunks. Each bunk has a thick curtain that can completely close giving you as much privacy as you are going to get on a bus with twelve people. It does allow you to read or look at your phone without bothering the person about two feet from you.  One important thing to remember is you cannot, I repeat cannot, get up like you do at home in your bed because you will hit your head on the bunk above you. That first night I heard more than one bang in the middle of the night.

This may be a little too much info, but I got on the bus with the dreaded UTI, which guaranteed I had to get up in the middle of the night to go to the bathroom. So, I quietly opened my curtain and rolled out of bed on to the floor, then crawled to the door which I opened as quietly as possible and found the bathroom. Then I repeated the process and rolled back into bed, using my phone for a light. I think I slept as well as anyone that first night because even the young ones reported a little bit of a restless night. The next four nights were a tiny tad better. One more thing about sleeping. The bus provides a pillow, sheet and blanket. I grabbed the two blankets I keep in my car for ball games and a pillow, which proved to be a smart move because the bus was freezing!!!

We arrived at the first venue, which was Canton, Ohio, around 10:00 in the morning. Some were ready to get up, but others were still sleeping. If you are an early riser or if you are one of the tour staff and have to get off early who have to remember to roll out of bed quietly and get your  bags quietly and get to the bus door quietly. The tour management team gets off the buses first to set up for the day. They brilliantly put down green tape with instructions on how to get to catering, showers, green room (hangout room for artists and speakers), and office. Each venue is different so when you wake up in a new place every day, this is vital. Once off the bus, it’s just “follow the green signs” until you get where you need to go. I don’t know who came up with this, but it is genius!!

The second best thing about tour life is catering. Catering is set up for breakfast as soon as the buses arrive. That has been handled ahead of time, so it’s ready to go. Now, keep in mind, I DO NOT go out of my house without wearing, at the very least, lipstick and mascara. I’m a blonde, so without those two things, I look like I’m still in the fourth grade only with wrinkles. But, on tour, there is no room for twelve people to get ready, so I was forced to appear in public like a wrinkled fourth grader. No one seems to care, so that’s the good news.

Eventually, everyone makes their way to catering for coffee and food. Breakfast is usually an assortment of eggs, bacon, fruit, yogurt, etc. (I could really get used to this part.) If you sleep in a little and get off the bus around 12:00, guess what?–lunch has appeared in the catering room. (again, I could get used to this.) The tour management team works with each venue so the tour folks don’t have spaghetti and green beans for four days. On this tour, we had something different every meal and it was awesome.

I’m going to stop here for today so this blog isn’t too long. Next week, I’ll pick it up with afternoons and nights on the tour. And tell you the best thing about tour bus life.

I hope you have a great week. Hugs, Chrys